According to a Rand study released earlier this year, there is no evidence that mandatory firearms training would have any direct effect on the reduction of negative outcomes. Interestingly, there is also no evidence that mandatory firearms training would result in an increase in positive outcomes either.  2AO maintains the position that mandatory firearms training is unconstitutional and thereby off the table for consideration as it would be an infringement upon our Second Amendment Rights. I have held the same position for a long time, and explained the many reasons why I’m against mandatory training. While it may seem self-evident that training and education in the responsible use of firearms would be of benefit, there are many factors related to the efficacy and value of training that lead me to believe that Mandatory Firearms Training, in particular, would have little to no positive effect… and might even be detrimental to the cause of reducing negative outcomes involving firearms ownership and use. 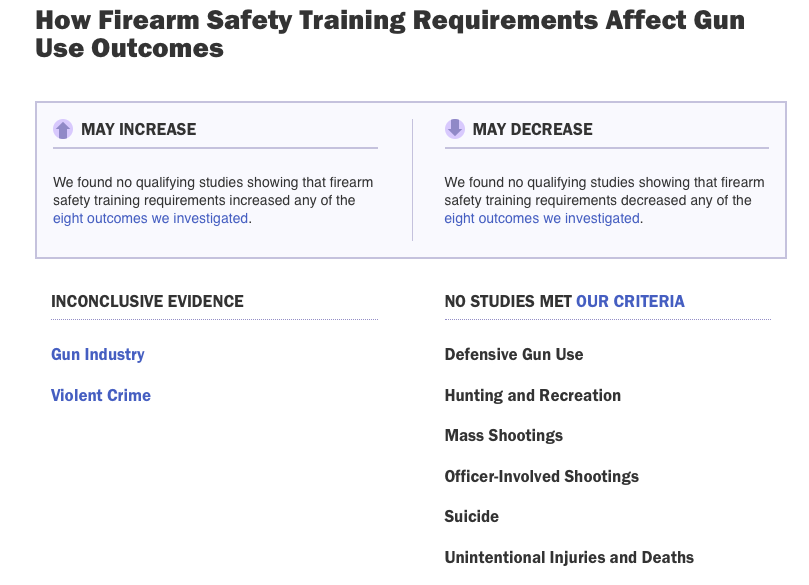 “…the motivations of the individuals who receive firearm training could affect the overall impact of the training programs.”

It is well established that the gun community generally resents and resists any attempt to restrict or hinder the free exercise of gun rights in the United States. Common sense informs us that people who resent being told that they must take a class are simply not going to get as much out of that class as someone who voluntarily enrolls in it or engages in it out of their own perceived need. Between the two lies the mindset of a student taking a class because he was advised to take it by a friend or trusted source.

Regardless of how good the content and presentation of information is in a given class, the attitude of the student going into it will have much to do with its success. And, we all know that content and teacher ability vary dramatically from class to class, with the worst examples almost always being at the lowest levels of education… particularly the “required” classes. Again, we are talking about mandatory firearms training, not the value of training and education that is sought out.

“The impact of safety training on key outcomes depends on the content of the programs, the effectiveness of the programs in conveying pertinent information, and the number of gun owners who then modify their behavior based on the information presented in the training.”

Classes that are seen as requirements to obtain a Concealed Carry License or even to own a firearm are quite often “lowest common denominator” classes with entry level instructors delivering material that was developed with a number of competing concerns, only one of which is the transfer of meaningful information and changing student behaviors. Mandatory Firearms Training is almost always very generalized and focused primarily one or more of three things:  passing a test, meeting a time requirement or conveying information in regard to the firearms laws of the jurisdiction. This isn’t to say that there are not outstanding educators teaching CCW Courses… but, even the best of them is stuck teaching curricula which barely even attempt to cover the topic of armed defense in the public space.

I am unaware of a mandatory course curriculum that requires one to present a handgun from a holster after processing some type of novel information and delivering a multiple round burst of fire to a chest sized target at a distance of between 9 and 15 feet. This is as close as we could get to a “most likely performance need” in a concealed carry defensive gun use that involves shooting a threat that needs to be physically stopped… but, nothing of the sort is required by any State or other Jurisdiction that I am aware of.

Another problem with the mandatory firearms training that currently exists in many places is that those who would be positively disposed towards taking a course even it were mandated would most likely be the type of people who would put stock in the courses value… and they might possibly assume that because they have taken the required course and passed successfully, they are are now Good to Go. And, it is a fact that the majority of individuals who take required training to get their carry permits do not go on to seek further training.

Again, I am certainly not lobbying for an increase in any training requirement. Requiring a truly comprehensive training program that I, after two almost two decades as a full time armed defense educator, would feel meets a “minimum standard” would require far more time and money than could ever be considered a reasonable requirement for the exercise of a Constitutionally protected natural right!

Mandatory Firearms Training is an infringement, but any responsible gun owner should agree that education, training and practice should be sought after by any gun owner, appropriate to the firearms they own and their intended uses of them. These are the competing issues for anyone truly interested in promulgating “gun safety” and increasing the average responsibility level of the average gun owner and why it will probably never be successfully done from outside of the community. The best way to encourage increased education and risk mitigation in the gun community is by changing the culture around such things, not through legislation.

As the research indicates, pro-Gun Control Politicians, Celebrities and even those injured or who have lost family members due to negative outcomes with firearms are not likely to influence the behavior and opinions of gun owners around safety practices nearly as much as the advice they receive from a trusted source or mentor. All the better if that advice comes in the form of an example to be followed and not just through lectures or talking points. Thoughts and conventions around safe gun handling and ownership have evolved greatly over the past 30 years as gun ownership has expanded and we have seen a dramatic increase in the number of people carrying or staging guns for defensive use. Thankfully, there are countless organizations, schools, instructors and community leaders who offer those examples along with best practices for any variety of circumstances facing gun owners. I am proud to be affiliated with, or supportive of, the work of many of these, including Personal Defense Network, United States Concealed Carry Association, Walk The Talk America, National Shooting Sports Foundation, Guns For Everyone, Black Guns Matter and, of course Second Amendment Organization.  2AO’s official stance on mandatory training is spelled out with over 50 other Position Statements at gunfights.info:

Mandatory Training for Ownership? (Against)

Some people outside of the gun community can’t understand how a training requirement shouldn’t be an obvious precursor to firearms. They make comparisons to Guns & Cars (completely inappropriate in this case) or want to ignore the reality of the Second Amendments restriction against infringements… perhaps because gun owners are so obviously infringed already. Some people also find it hard to believe that a person who makes his living providing firearms related training wouldn’t be in favor of such training being required. Not only am I not in favor of it, I will continue to work to prevent mandatory firearms training becoming the Federal law of the land… and to have it struck down wherever and however it currently is. Thankfully, there is no available evidence that a lack of mandated training increases risk… and there is clear reason to believe that gun owners are made more responsible and more capable through participating in voluntary education.