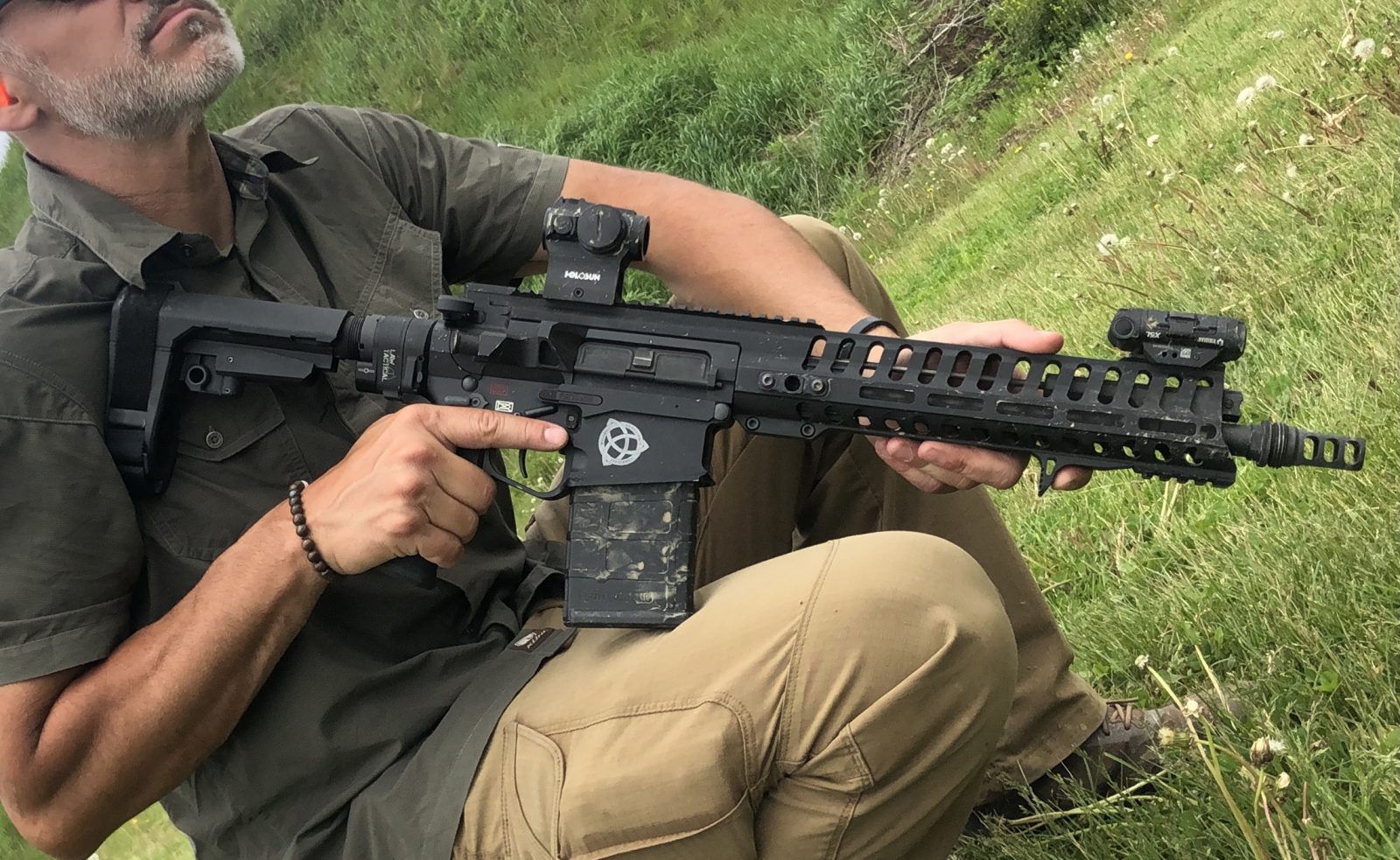 Unclear Regulations are a recipe for disaster. 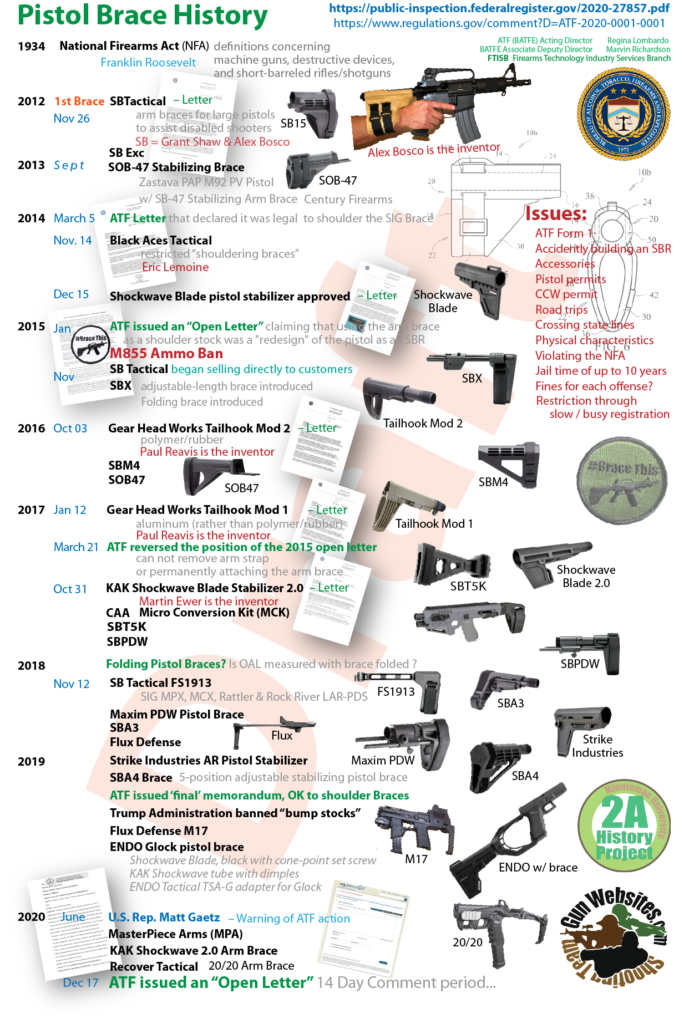 Second Amendment Organization has long held a position that the lack of clarity around many laws and regulations from the BATFE make it almost impossible for many in the firearms community to be confident that they are in compliance in many areas. We believe that responsible gun owners overwhelmingly act in good faith with the intention of following regulations and laws, even as our community pushes to have unconstitutional restrictions rescinded.  We address several of the areas where more clarity is needed in our Position Statements.  Note that “seeking clarity” in regard to an existing restriction does not mean that we find the restriction itself acceptable or appropriate. One area of regulation that exemplifies this quandary is Pistol Braces.

For many people, the BATFE Notice that went out in December in regard to a possible change in their position on privately owned braced pistols was a real wake up call. Fundamentally, the ATF was, and probably still is, contemplating a change in enforcement of existing regulations that would essential subject private owners to the same scrutiny as manufacturers who have been selling braced pistols as complete firearms. Originally, braces were only sold as aftermarket accessories. After some back and forth about their legality and their use… and whether or not the latter affected the former… ATF basically took the position that they were not going to get into the details of how a private gun owner used a brace, so long as it was manufactured in a way that it could be used to stabilize a pistol while shooting one handed, with the pistol extended from the body as any other pistol would be. The requirements included that the brace itself could be strapped to the shooter’s arm as a clear indication that the design intent was within the intended parameters. If this already seems confusing: It is.  GunWebsites recently created a timeline of the convoluted history of non-NFA Pistol Braces HERE.

at least if we’re not going to be left alone.

When the ATF announced its intention, it open a period for public comment on the proposal. Ultimately, the proposal was official rescinded, but not before tens of thousands of public comments were submitted. One has to assume the something approaching 100% of them were in opposition. I submitted one, which you can read below:

I am opposed to the proposed increased scrutiny and regulation of Stabilizing Pistol Braces, as described in the Notice published on 12/18/2020 by the BATFE. I have been active in the firearms community as a gun owner, shooter, hunter and/or an armed professional for over three decades and worked in the firearms industry since 1997. I am an educator, author and business owner. In addition to my my primary vocation as an instructor, I have an FFL (07) and SOT. I own several pistols equipped with Stabilizing Braces, I do not own “short barreled rifles” (SBR)… though I have been issued them as a law enforcement officer and understand the value that the configuration offers. Pistols equipped with Stabilizing Braces are not the equivalent of SBRs and should not be treated as such, regardless of what other accessories are attached to said firearm or how they are configured.

Determining whether or not an individual has configured a firearm with a Stabilizing Brace solely to circumvent registration of an SBR under the NFA is an inherently subjective endeavor and that will not be changed by describing various objective aspects of a firearm. Regardless, there are several arguments against implementing the proposed guidelines:

1. Hundreds of thousands of gun owners have responsibly used braces for many years now, proving they don’t need special regulation. If it is the position of the BATFE that a significant number of them have actually built SBRs, it makes more sense to consider de-regulating SBRs, given the lack of negative impact braced pistols have had. There is no data that suggests an increase in criminal activity or firearms negligence tied to Stabilizing Braces.

2. Subjective application of the proposed guidelines will inevitably lead to well-intentioned gun owners becoming felons. We are approaching a full decade of confusing, often contradicting, information from the BATFE and within the gun community in regard to the legal ownership and use of Stabilizing Braces on pistols. Many gun owners were relieved by the perception that the BATFE had backed away from any position of increased regulation in regard to stabilizing braces and their use. The mere proposal of increased regulation over the past week has caused massive disruption to the firearms industry over an issue that should require no further discussion.

3. While waiving the $200 Tax on SBR Registration may be intended as a gesture of good-will, it doesn’t overcome the burden of additional issues that come with NFA Item Ownership, nor does it address the issue of SBRs being prohibited in some States. Pistol Brace owners in States that do not allow private ownership of firearms designated as “Short Barreled Rifles” will be deprived of private property without compensation under the proposal. For those gun owners who do have the option of legally owning “short barreled rifles” in their States, there will still be burdensome issues related to local law enforcement notification/approval, storage and travel with their firearm created by this proposal.

4. Stabilizing Braces, as currently owned and used, have created jobs and inspired innovation in the firearms industry. Unnecessary regulation will affect those jobs and deter future innovation. At a time in our country where there is still massive unemployment and increasing concern over financial security, any action against a vibrant industry that continues to grow should be avoided if possible.

5. Stabilizing Braces, as currently owned and used, have increased responsible firearms use and made it possible for more people to use firearms in a safe and controlled way over a wider variety of circumstances. Congruent with the original design intent of these devices, many people of all varieties of ages, sizes and physical abilities are able to use braced pistols in a variety of ways to improve their control and safe use of firearms. This may include using the brace itself against the shooter’s body to support the weight and recoil of the firearm.  It is hard to understand how any use of these devices that decreases the chance of a loss of control of a firearms by any shooter could be considered a negative, much less a felony.

6. The vast majority of stabilizing braces are attached to firearms which have been purchased through Federally Licensed Firearms Dealers, involving a background check and already creating a paper trail to their owners. The brace itself is not a firearm nor an NFA Item, it is wholly inappropriate and unnecessary to use it to require gun owners to register their otherwise legally owned non-NFA pistol.

Thank you for considering these points and those raised by my fellow American Gun Owners,

In addition to filing that comment, I also did a live Video on the topic last month. In the video, I acknowledged that I understood the “logic” of the position that the ATF wants to take: If your firearm is set up for two handed use, just like a rifle would be used, but equipped with a brace instead of a stock: You appear to be circumventing the NFA rules in regard to having an unregistered Short Barreled Rifle. Of course, there are a couple of problems with acting like there is a huge problem with that after years of saying nothing about private individuals configuring their firearms in such a way:

The Struggle Over The Pistol Brace Continues…

This is not the first time that we have addressed the issue of the ATF possibly setting up American Gun Owners, or at least not seeing that they have contributed to a potential problem, in regard to pistol braces. This article, from just over 2 years ago,  addresses some of the same issues that were brought up again this past December. Personally, I am an owner, user and advocate of braced pistols, particularly Braced AR Pistols. Several years ago, amidst an earlier ATF back & forth over their legality, the release of PDN Training DVD  covering AR Pistols was held up for months after we had produced thousands of copies. We did release the DVD eventually and I have since published several pieces of content on the topic, including a Live Video where I explain why I really don’t think of them as a “gimmick”.

Obviously, we are not alone in our concern over this issue. Firearms Policy Coalition, Gun Owners of America and the NRA have all opined on the situation as well.  Second Amendment Foundation, however, has taken things to another level with a recent lawsuit against the BATFE over their treatment of Pistol Braces !

Alan Gottlieb spoke about the details of the lawsuit on Armed American Radio last week. We hope that this lawsuit will both bring regulation clarity to the issue of pistol braces and lead to fewer restrictions on responsible American Gun Owners. We believe that the only hope we have of regaining lost rights in the near future will be through the court system and SAF is a the most experienced and successful organization we have in that arena. As always, the best was that you can get involved in the prevention of any more restrictions being put upon is bye being a proud, responsible gun owner and influencing those around you through grassroots advocacy. You can learn more about what SB Tactical, the foremost manufacturer of pistol braces in the US has to say in this extended interview.