Gun Control should be removed from the platform of every major American political party.

I wrote an article stating so and explaining why shortly after the 2020 Election when it looked Biden won, but that the Republicans would still hold the Senate. The article was published at Ammoland and was met with mixed reviews… as most of my articles at Ammoland do.  I’m used to the idea that much of what I say isn’t what the noisiest parts of the gun community expect to hear. What I was surprised by is the criticism that I received directly from other members of the gun rights movement establishment. In retrospect, I realize that putting that article out just a week after their guy lost and amidst a firestorm of stolen election gibberish certainly had an effect on how it was received. Anyone or anything outside of the orthodoxy isn’t dealt with well on any average Tuesday in gun world, dropping that article when people were trying to figure out what do after months of rhetoric that amounted to “kiss yer guns goodbye if Biden wins!” might not have been the best timing. While  the statement above this paragraph is something that every hard core 2A supporter says they want, it would be so disruptive to the worlds view and narrative of the Gun Rights Movement that I’m not sure the gun community, much less its “leaders”, is ready to work towards it in a genuine way. This was the core statement of the article published the week after Election Day:

There is no party that owns the issue. There are over 100 Million Gun Owners in the United States. Around 70 Million Americans voted for each of the leading two Presidential Candidates. Some Gun Owners voted for Biden. Some Gun Owners Didn’t Vote at all!? Some non-gun-owners voted to re-elect President Trump. Some people that think “Universal Background Checks” (ie- the end of private gun transfers) are okay probably voted for Trump. Some people that think ownership of AR15 rifles is okay probably voted for Biden. Some people with a wide variety of opinions on guns voted Libertarian or possibly wrote in everyone from Bernie Sanders to Wayne LaPierre. It is foolish to think that everyone who is a gun owner is a Republican or will vote for Republicans… and, many people will remind us that some Republicans aren’t “real republicans” (yes, they are the same people who feel they can identify “real gun owners” based on their votes).

It’s easy to say “gun owners should vote for the party that isn’t pushing gun control”… but, that’s not real.

With at least a third of eligible voters owning guns in this country and probably close to half living in a household with guns, and razor thin margins in most elections, it’s ludicrous to suggest that all gun owners are going to vote exclusively for one party. It also ignores the fact that other things matter to post people. I spent a lot of my young adult years in the south eastern US where there were (and still are, I suspect) many “conservative Democrats”. In the last decade, I’ve spent a significant amount of time in the midwest where there are millions of households that love their guns but also want their unions. And, then there’s the politics of personality factor. It has to be accepted that some gun owners simply voted against Donald Trump in the same way that some voted against Hillary in 2016. Voting against a candidate is a problem, but it’s a reality of our times.

There are massive cries within the gun community to ostracize gun owners who have voted for Biden… or, more accurately, gun owners who haven’t overtly supported President Trump in the last election. The most offensive posts suggest that those gun owners are traitors to the cause of gun rights. I was told by someone last week that they can’t be expected to tolerate gun owners who “have signed on to force [him] to abdicate [his] rights or face prison.” I don’t think that is the train of thought of a gun owner who votes for a Democratic Candidate. If you are reading this article at AmmoLand News or if you follow my social media, I have to assume that you are “Pro-Gun”.

If you’re not, we welcome you and invite you to still read the article, but I’m really not writing to you today… but you may find it interesting, none the less.

We’re Pro Gun. Our primary voting issue maybe gun rights. We might advocate for gun rights and lobby for changes in laws that increase gun freedom. We might think that all gun control is unconstitutional and every gun restriction is an infringement. We might spend countless hours every year voluntarily working for the cause of gun rights. You might even consider yourself a one-issue-voter (I’m not). We aren’t like every gun owner. That’s okay. Every gun owner isn’t going to vote for the same person, that’s okay too.

Earlier today, during a phone conversation with a well established gun rights leader, I was asked “How do we convince [non-right wing gun owners] that we are good people and they should be proud to be associated with us?”
It’s a good question, but the answer isn’t about proving how many of us are “good people”. It’s not that we do volunteer work, love our country, are good parents or give to charities… the problem is that we tolerate a lot of toxicity.  Imagine if you showed a video of violent rioters, or Democratic Leaders were inciting riots, to someone that was vocal about Civil Rights Issues last summer and asked them how they can allow themselves to be associated with it, what would be more compelling? What would give you common ground to build on?

“We’re good people too, man… you know I would never do that!”  or  “Yeah, those guys are an embarrassment and definitely don’t represent our values!”

We need more people in the gun community to speak up about the bad actors, including those who allow violent rhetoric, culture war narratives or intimidation advocacy to be perceived as the voice of the Gun Rights Movement. Calls for unity that are really just an attempt to silence anyone critical of things that have been tolerated for far too long aren’t inclusive or helpful. One organization leader actually told me that it was “bad for my brand” to not demonize gun owners that voted for Biden. Those types of positions aren’t about unity, they are disingenuous attempts to control the gun community or make it okay to pander to an audience, often for financial or social gain. It’s easier to build an audience with a broad  “us versus them” message. It’s easier to monetize simplistic views than nuanced ones. It’s easier to fundraise with fear-mongering than with education.  Calls to stop “eating our own” may be well intentioned, but those repeating that phrase may want to re-evaluate who we want to be… or who we need to be. You might not believe how hard it was to form a coalition of organizations who were willing to co-sign a Statement denouncing the the violence at the US Capitol Building on Nov 6th without equivocation. Just about every major gun rights organization was invited… I’m very proud of the ones that stepped up.

If welcoming gun owners with different political views is wrong,

I don’t wanna be right.

I’ve gotten a lot of static from not being politically “right” enough, even as I was knocking on doors in Georgia last month trying to get out the vote to maintain Republican control of the Senate… with a 25 year public track record of defending our gun rights. So, I can definitely empathize with the self-identified liberal or Democrat who doesn’t want to step into the gun community and volunteer to try to help out. Gun Rights are Human Rights and the Second Amendment protects the gun rights of all Americans, just like the First Amendment does. We who love freedom fight for the rights of those who will say things we don’t like… even if those things are extreme political or social views that we think are damaging to our society. That doesn’t mean we can’t criticize those views. There is a world of difference between saying that someone “shouldn’t be allowed” to say something and saying that they “shouldn’t” say something. There is a world of difference between saying “I don’t want to be associated with that view” and “holding that opinion makes all of a person’s opinions invalid”.  To be clear, I am 100% supportive of gun rights for racists, but I am also 100% against racism. If you feel the same way, it is perfectly okay for you to
criticize the guy who wears the racist T-shirt or emblem while he is speaking about gun rights. In fact, I think it is imperative to do so.

We are a diverse community and we celebrate that diversity in many ways. It’s time to embrace thought diversity as well. Our cause needs advocacy from the left of center… ostracizing “them” is a really foolish version of eating our own that has been accepted for far too long. I spoke on this topic a few years ago at Gun Rights Policy Conference, where I was presented with a “Defender of Liberty” award by Second Amendment Foundation. I was asked to address the Culture War topic. I suggested we stop saying “them” when we mean “gun grabbers”. We stop saying “The Left” when we mean “anti-gunners”. We stop saying “Democrats” when we mean Nancy Pelosi or Mike Bloomberg. The speech was met with applause and many people voiced support for the concepts. Unfortunately, I haven’t seen many people putting those concepts into practice over the last few years…so, I’m asking again: Listen to the Speech and Hear the Message. 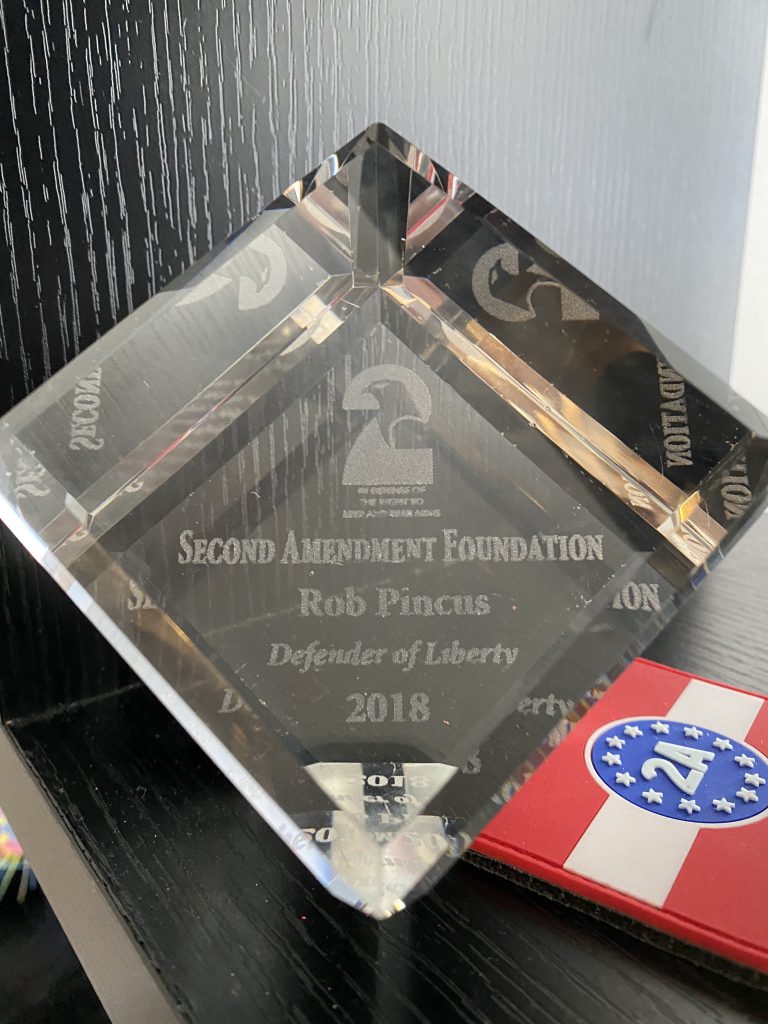 How you feel about Elections, Immigration, Unions, Health Care, Recreational Drug Use, Taxes, Church, Gender Fluidity, Masks, Abortion, BLM, Inc., or Soft Tacos shouldn’t have anything to do with you helping me defend our Gun Rights. If you agree, help me clean up the gun community by pushing back against the culture war narrative.